The magic of dolphin spotting

Spotting dolphins is a breathtaking experience with many viewing these marine  mammals as magical.

In Maori mythology, dolphins are taniwha or water spirits. Their playful leaping and inquisitive nature certainly makes them popular, with people keen to spot them in the water.

While there are several species of dolphin in New Zealand, here in the Bay of Plenty, bottlenose and common dolphins live in these waters in several pods, so sightings are not that unusual, particularly in the warm waters during the summer months.

It is less usual to see a very large number of dolphins  at once.

Once in a lifetime

Geoff Bishop, 66, of Pyes Pa, was on a dive with other members of the Mount Underwater Club when they spotted a pod of more than  50 dolphins.

“Now I could actually see and count 50, but I reckon there were actually up to 100,” says Geoff.

The divers were on the boat Orca Wild Adventures which Geoff says are one of two boats located at Tauranga Bridge Marina dedicated to  dolphin tours.

This particular sighting was the most number of dolphins Geoff had  ever seen.

“We were wildly excited and everyone ran to the front – they were just about three to four metres away. We made sure we slowed right down for the safety of the dolphins.” 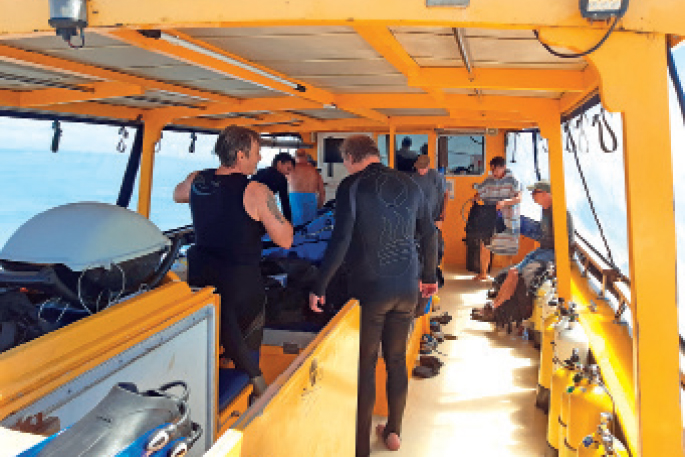 Geoff has been with the Mount Underwater Club for a year. Despite being a keen boatie and fisherman, and having previously owned a boat building business, Geoff says it is always a special moment to be alongside dolphins.

“It reminds you of the wonderful life within our oceans. I think there is something extra special about being near dolphins – they are such magical creatures.”

Geoff says he and the other divers, of which there were 15 in total, had left the bridge marina on Sunday, February 21; a beautiful sunny day perfect for diving. They first headed for Schooner Rock.

“That first dive itself was amazing – about 30 metres down we were greeted by hundreds of fish.

“There were pink and blue maomao, red moki and many more beautiful fish. We even caught a few crays. There was so much going on in the water.”

It was on their way back home that they were met by the huge pod of dolphins.

“It was my best dive to date, hard to beat being up close and personal with such majestic creatures.”

While spotting dolphins is a pleasure, boats must ensure they stick to the Marine Mammals Protection Regulations, says the Department of Conservation.

DOC rules are as follows:

•    A maximum of three vessels (including jet skis and kayaks) are allowed within
300m of a group of dolphins.

•    Approach dolphins slowly, from behind and to the side of the group.

•    Never drive through, cut off or circle a group of dolphins.

•    Don’t make sudden or repeated changes in direction or speed.

•    Don’t attempt to swim with groups with calves or juveniles (animals less than
two-thirds the length of the adults).

•    No boats allowed within 50m of whales or 200m of female whales with calves.