I have recently returned from a once-in-a-lifetime trip with Darren and his Wettie snorkelling team to Fiordland.

I taught Darren at Mercury Bay Area School 42 years ago!

He has been inviting me to join him for several years so finally we teamed up on the vessel Parimar with great mates Blink, Tak and Puggy (well-known Mercury  Bay fishermen).

With my nickname being Zap, the other members of the party asked if anyone from the area had real names.

Everything was big, including the sand flies at times!

Besides the incredible size of the paua, kina, scallops, crayfish the blue cod were the most prolific and so much fun to catch.

The fishing was amazing, with the cod being voracious feeders that took to anything presented their way, with most lures being the equal of baits.

Perhaps with several overseas fishing options now being in jeopardy more anglers might look to options like Fiordland.

I was challenged to spear a cod and after a late night, weak-moment, I accepted.

There was friendly banter between us four fishermen and the five divers, as both groups made increasing contributions to the menu and fish to take home – and let the others know of their efforts.

I was totally amazed at the number of cod that appeared after Darren broke open a very fat kina.

They were competing with tarakihi as the tasty morsels descended. The tarakihi, barracouta and gurnard were the only species that were smaller than those in northern waters.

The mission was successful, thanks to Darren’s assistance and the incredible Wettie wetsuit.

It was 14 degrees but I felt great. The new-look wetsuits were certainly an upmarket improvement compared to my last dive in New Zealand waters 30 years ago.

Having completed this challenge, another one was forthcoming: snorkel for crayfish.

I was a little apprehensive with the swell moving the weed, which made long range spotting difficult.

I was in awe at the depth the others were operating at and the time they could hold their breath – I was looking and feeling for air soon after descending.

Darren assisted by spotting a crayfish for me and, after major disturbance of the visibility from my inept skills and a half-filled mask, I had success.

Buoyed with success I immediately started looking for one bigger, concerned of the potential reaction from the others when they compared my catch to the others.

I also needed one for bragging rights and a photo. I was thrilled to finally get a nice sized cray, but must admit to numerous attempts at dislodging it and the subsequent loss of limbs it suffered. I should have listened to the advice offered and put that into action in my initial attempts.

Following this success and still feeling warm, I moved onto the third leg of the trifecta: getting a nice-sized paua.

This was probably the easiest challenge once a spot was located.

What was apparent was the conservation ethic observed by the snorkelers. There was a proliferation of paua in some locations, but only one per person was taken and we didn’t do this every day.

The size of the paua and truly amazing talent of the on-board chef gave everyone a nice meal.

My paua shell was kept as a souvenir.

The next mission, to collect kina, wasn’t really a challenge.

They were like cannon balls and the roes were as viewed on fishing programmes: massive.

I must admit to eating more than my share, readily snacking on such a delicacy. Luckily, I had a good supply of gout pills.

Still feeling incredibly warm, I joined the group lazily drifting along with the tide in the shallow, sandy bottom where Darren had observed many nice-sized flounder on a previous trip.

I didn’t locate any, but noted many small gurnard and oysters that had been seeded in the area by fishermen over recent years.

Darren did locate some flounder and called me as he wanted footage for his excellent YouTube channel, Wettie TV.

This final mission was duly completed and I quickly returned to the tender. In my haste, I forgot to pull my hood down and was suddenly alerted to the 14 degree temperature.

Perhaps with several overseas fishing options now being in jeopardy more anglers might look to options like Fiordland – a wonderful experience in an area that is totally unique. 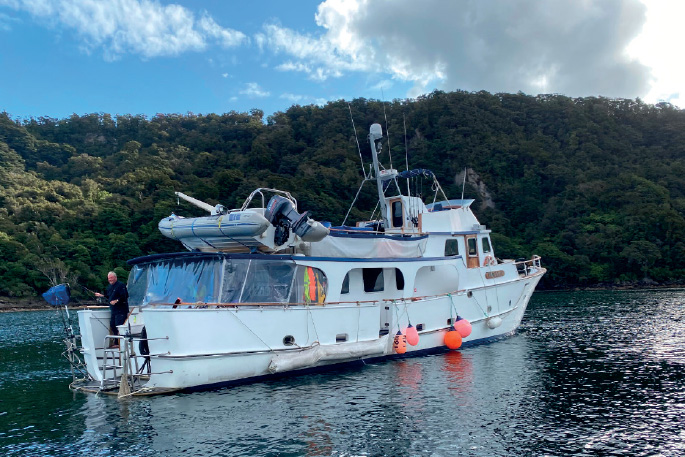