Beau Geste, a Mod 70 trimaran, is one of the speediest boats in the Southern Hemisphere.

And after a full refit at Tauranga’s Vessel Works, she’s travelling even faster than before.

“It’s quite a standout boat – you wouldn’t see another in the Tauranga Harbour,” says boat captain Spencer Loxton.

Beau Geste was unleashed on Tauranga waters in February for sea trials following the refit.

Spencer says the trials have been a success so far.

“We have improved on what we wanted to, particularly in terms of speed.”

The 70-foot boat weighs seven tonnes and is owned and skippered by Hong Kong-based Karl Kwok.

During sea trials, a crew of ten took Beau Geste out on the water for about five hours a day over a two-week period.

“We are just trying to make sure all our work on-land has been executed properly.”

“Before the boat went into the water, it had been stripped down,” says Spencer.

Since being here, the crew have made the most of Tauranga’s “great facilities” in and out of the water.

“We have used lots of supplies for the fit-out from around Tauranga. It’s a big part of why we came down here. Most of the parts we used were made in New Zealand.”

Spencer says the amount of sea-room was also a big incentive for being based in the Bay.

“We can launch the boat here, and it’s only a half-hour sail out into the ocean. This is pretty handy for when we are doing sea trials.”

He describes the water in Tauranga as “untouched”, saying not many race yachts make use of the space.

“Normally we are travelling at about 25 to 30 knots, it’s easy for us to run out of space.

“We need as much space as we can get, which is another reason why we spend so much time in Tauranga.”

“It’s untouched here apart from the shipping lane, this is unheard of throughout the rest of the world.”

The Beau Geste crew set race records last year at the PIC Coastal Classic, finishing in first place with a time of five hours and 37 seconds. “This was quite a big win for New Zealand.”

But where will Beau Gest be racing next? That is yet to be decided, says Spencer. “We will probably do some more sea trials here for the time being.”

The Mod 70 trimaran was set to compete in the 2020 China Sea Race in April, however, this has been postponed due to the outbreak of coronavirus.

Spencer, who has been the boat captain for the past two years, says a sense of adventure is important when racing.

“Winning - that’s our incentive to work as hard as we do. We try to sail as fast as we can, as safely as possible.”

He says love for being out on the water is also essential. “All the crew surf and fish in their spare time. Loving the water just goes with the job.” 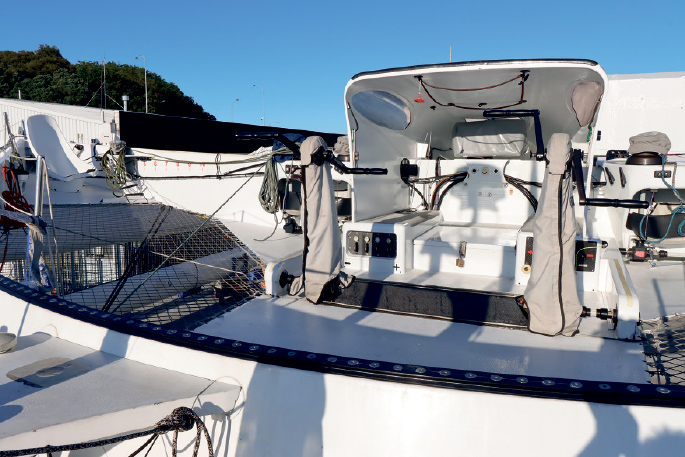