The all woman crew from Rascal Tom.

The concept a combination of expedition and race regatta.  Great Mercury Island is the perfect place for such a regatta.

The Legends was the brainchild of club stalwart Doug Harrison who envisaged a sailing event in which all sailors could join together for a great club event of fellowship and fun mixed in with a bit of sailing.  The venue is ideal for being an almost equal distance from Tauranga and Auckland and has two natural harbours, one on either side of the island.  Both are capable of holding a large fleet of boats.  As a bonus the island is spectacularly beautiful.  It is one of the special things to love about New Zealand – relatively few people get to see some of the most amazing places because they are not that accessible.

The expedition part of the regatta is the getting to and from Great Mercury Island.  Great Mercury is at the top of the Coromandel which is 63 miles from Tauranga and a similar distance from Auckland.  That is about 10-12 hours of sailing for most yachts, depending on the weather.  In benign conditions it is not too difficult a task but the weather doesn’t always cooperate which makes the transit more challenging.  This is an important part of the regatta ethos – providing opportunities for sailors to improve their seamanship and perhaps undertake a trip that they would not normally tackle.  There is also an option for boats to start from Whitianga which encouraged Mike Way to enter Summer Magic, a 25 foot trailer sailer.

For this year’s opening leg the wind was a brisk westerly of 25-40 knots.  Most boats found the task challenging enough but with the wind being offshore the sea state was kind and provided opportunities for some boats to post quick times.  Others were more circumspect, happy to arrive well rather than quickly.  Several skippers reported that novice or shorthanded crew became nervous when the wind got over 30 knots so that they reduced sail area considerably, but that reinforces good decision making on their part – an important part of good seamanship.

By the end of the day, the conditions were getting difficult with the wind consistently over 30 knots at the island and, with the tide running against it, the sea state had deteriorated such that the committee made the decision to change the finish line to Coralie Bay.  That is not such a bad thing because Coralie Bay is on the east side which is sheltered from the westerly winds.  Even so, some boats preferred the normal harbour at “the Cove” (Haruru harbour) so for the first night the fleet was split between the two, while the wind howled around us.

Several boats chose to stop halfway and await the better conditions expected on Saturday.  Voodoo Lounge suffered mainsail damage on the way up, so didn’t make it at all.  Outrageous Fortune suffered broken steering during a gybe in Colville Channel and limped into the Cove glad to make it to a safe harbour.  Summer Magic had several false starts and waited at Whitianga until the conditions were more suited to their size of boat.  Ian Williams on Candela put in a commendable effort being the only solo sailor to make the trip.

The second leg was the traditional around the island race which is a popular event and over 20 boats participated.  The wind was still a good 20 knots but it was consistent so an enjoyable sail was had by everyone.  Prize giving afterwards was held on the beach at Coralie Bay and everyone had a great time.  We heard of the adventures of Wil Horne and Ian had on Truxton in the Coastal Classic the day before.  In the strong conditions we all faced, they broke their rudder clean off, had to be towed back to Auckland, Installed a new rudder overnight and made the trip from Auckland to be at our prizegiving all within 24 hours.  We also counted down for the arrival of the only all woman crew, on Rascal Tom and became worried when they failed to show.  Gun Caundle was the most nervous not only because Rascal Tom is his boat but his daughter, Robyn, was the skipper.  It turns out that the reason they were late was that the crew didn’t receive the message that the finish had been moved to Coralie Bay and so had finished at the Cove only to find nobody there.

The third leg on Sunday, a short race from Coralie Bay back to the Cove, was spoiled when the wind dropped out completely after the lead boats had finished.  That left the slower boats becalmed for an hour or so, many becoming frustrated and retiring.  The prize giving that day, at the wharf, was a civilised affair with canapes and bubbly on the beach being provided by Erin and Haeg on River Rebel.  It was all very enjoyable and a great way to finish the day.

All that remained was the return to home base.  Elixir, heading to Auckland faced a day of headwinds, whereas those heading to Tauranga expected an easier time with wind behind.  One of the favourable rules of Legends is the Motoring Rule.  This rule reflects the ethos of the regatta, which is for everyone to have a great time, not necessarily with orthodox racing.  It means that boats are allowed to motor without being disqualified if that is the most efficient way of getting home.  So in the early hours of Monday, when the breeze was light boats could use their motors to make sure they got home at a reasonable time.  The crew on Pork Chop chose to go for an early morning dive instead, which meant they left when the wind was up and completed virtually the whole leg under spinnaker.  Because of this, they were clear winners of the leg which set them up to take the trophy for the weekend.  Adam Yates, the Commodore and one of the owners of Pork Chop has completed all 16 regattas and is glad to have finally got his name on the trophy!

The main prize, though, is for participating, not necessarily winning.  The major prize this year was a B&G AIS and VHF supplied courtesy of Pro Marine Electrical.  Ross Currie from The Rascal was the lucky winner.

Thanks must go to all 26 Skippers and boats which made the effort to participate and to the committee for putting together another excellent weekend.

As Summer rolls around for 2019 the Mount Maunganui Yacht Club is planning a busy calendar.

Summer started with the Legends Regatta, which was held at Labour Weekend.  A separate report on this very successful weekend as mentioned elsewhere in this edition.

The major items of the summer programme is the new Triple Coastal Series.  This is a series of three races for boats from Tauranga interested in coastal racing.  The series consists of three events:

The series is open for boats from any club affiliated with Yachting NZ.

The year end Christmas raft up is going to be held on 15 December and will be at Pilot Bay.  The idea is to celebrate the end of the year on and in the water rather than ashore.  All members are welcome to come along and a water taxi will be available for those not able to bring their own boat.

The 2nd annual sand bar cricket match is going to be held in the new year.  We need to wait for an especially low tide to coincide with a weekend and this doesn’t happen until March.  With the newly dredged harbour channel, deep draft boats are able to ‘moor’ alongside the bank and participate or spectate on the cricket happening in the middle of the harbour.  This was an enjoyable event last year and is a good way to make the most of Daylight saving and summer weather. 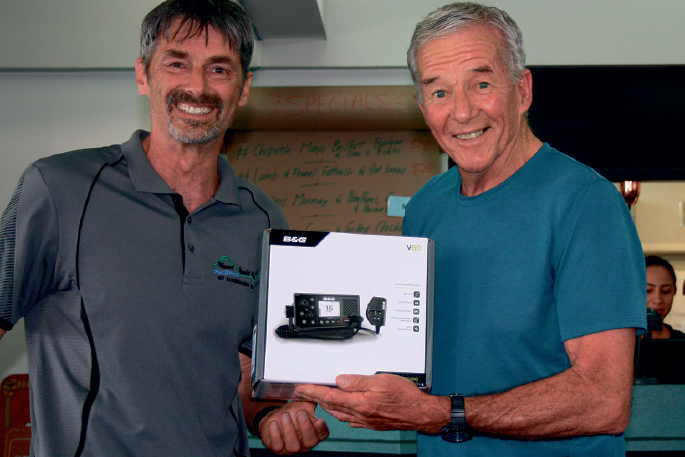 Ross Currie from The Rascal winner of the B&G and Promarine Electrical participation prize.

Improved facilities for the summer

Where are all the John Dory?

Named the best in NZ

Not the normal actions of a Skipper