Three days earlier, sailing back from Fiji on Stuart and Pamela’s yacht Essence, the experienced sailors knew a storm was coming. The decision was made to head directly to Opua in the Bay of Islands, rather than Tauranga.

“The thing that drove Stuart, Pamela and Bruce was to always take the safe course,” says Stephen.

The boat was in top-notch condition, with Stuart doing more maintenance before they left Fiji.

“There is no doubt that was an amazing boat. The winches were in good condition, the skippers were really good and I was always impressed with the diligence that Stuart, Bruce and Pamela all put towards weather decisions.

“They had four models that they were following the whole time. They had two separate strands of information, I think one from Bob McDavitt, and another from coastal people based in Auckland. I was astounded that none of them ever married up. You have a whole lot of models to look at coming from the same data, but they don’t add up the same way.”

With the safest option selected, they headed as fast as they could to Opua.

The boat had been fully prepared the day before. A storm jib was rigged, and inside, the cabin was as tight as it could be, with the floor screwed down and held in some places by tape as well, to make sure.  Unfortunately the winds came up far stronger than the 45 knots expected.

“We went into the storm knowing it was coming and it hit real hard.

“I’d been told that the wind speed device on the mast stops at 60 knots. It was red lining. In other words it was over 60.

“The waves seemed far bigger than 15 metres. If you’ve seen the film ‘A perfect storm’, that’s what it felt like. They were humungous.”

The boat had been moving fast through the water, and Stephen and Pamela sheltered in the cabin while Stuart and Bruce stayed on deck.

“We got knocked down twice,” says Stephen. “I think the first one about 10.30 and we carried on.  Pamela asked if I felt confident. I said ‘look out the back we’ve got some of the best skippers out there. I feel confident.’”

They were both in the cabin when they heard what Stephen describes as a ‘massive whomping’ sound. The next second he was under water.

“I think we either turned turtle, knocked over by a wave, or we broached. To me it felt like the boat flexed.”

The windows had exploded out. Stephen was under water for so long, that he’d already pulled his life jacket by the time he came up again.

“Pamela was already moving towards the radio, her head covered in blood. She put out an amazing Mayday call and they answered. But of course there was no position. The position GPS had been knocked out.”

The EPU was also gone. Half an hour earlier when the boat had come within range, Pamela had spoken to the Coastguard for the first time that she was able to raise them.

“She’d given where we were, how many people on board and all the data that they need and so we knew even by dead reckoning that they’d find us eventually. But the EPIRB’s loss for us, certainly for me, really made me quite upset thinking ‘how the hell will they find us in sea like this?’

The staircase had gone, and Stephen tried to see what was happening on deck.

“The whole front of the boat was fairly munted.”

He could see Stuart and Bruce, pulling each other out from under the mess, and opened the hatch to help. They quickly realised that Pamela and Stephen were in a sinking cabin with water coming in the windows, the life raft and EPU both gone.

“Luckily Bruce had a Personal Locator Beacon. It wasn’t actually on and it was in his cabin. Bruce did something unimaginably brave in that sinking boat. I don’t know how deep the water was, but he went forward to where his cabin was, got it, closed the hatch and came back to us.”

At this stage, they all knew they would be going into the water. The Mayday was incomplete in terms of location, the boat was going down, they had no EPIRB and no life raft, but they had each other.

“Pamela poured out some chocolate and we sat around the shattered combing where the steering wheel was and talked about what to do and how we’re going to survive in the water. There was no panic, just good planning. We talked as equals about how we’re going to come back together as four. Unfortunately that part didn’t occur in terms of all coming back alive.”

They got their tethers, attached themselves and exited the boat, calmly stepping out through the gate on the safety lines.

“We still had humour even as we were leaving the boat. Stuart brought along the grab bag, and the dan buoy thinking we could always wave it. Pamela and I both clung to it at various stages as a life ring.”

After some time in the water an albatross landed beside them and kept them company, a source of comfort as the group became colder. The talking gradually dried up as they were repeatedly dumped under the waves.

“It was like a washing machine effect with water pushing us down, and wondering will we ever come up.”

“We became more animated when the Air Force Orion turned up and did about three or four passes before it actually spotted us and waggled its wings. Stuart opened up a small handheld radio and talked to the crew, giving them directions in reference to their port or starboard side.

“It was a good feeling when we saw the Orion. It was even better when the life raft was dropped.”

Dropped upstream of the waves, a huge line floated out from it, which Bruce and Stephen grabbed and started pulling on.

“If you think they drop the life raft and it’s ‘all over rover’, that’s just half the story. Getting to it is really hard. Getting in it is hard.”

Bruce was first into the life raft, and helped Stephen who found himself stuck by a tangle as he came up the chute.

“The tangle was Pamela and Stuart. The tumbling had wrapped the ropes around them tightly.”

The helicopter diver arrived and cut them apart with a large knife, then sent Stuart up first before retrieving Pamela.

“All the time that I was in the water I never once saw Stuart take his hands off Pamela. Most of the time he held her head.  She wasn’t talking much, as she was semi-comatose. As he got weaker later on he held her arms. He never let her go.

“When the diver was cutting her away from Stuart, Bruce was holding Pamela and I was holding Stuart. His lips were blue but he was still holding Pamela’s hand. I had to tell him ‘Stuart you’ve got to let her go. Everyone is safe. Pammy is safe’.

“My last sight of him alive was as he headed up to the helicopter festooned with the equipment that was still attached to him.”

Sadly the experienced skipper and sailor Stuart Pedersen didn’t make it, dying during the difficult rescue.

“The amazing thing is love at the end,” says Stephen. “Stuart loved Pamela so much. He held her all the time until it was time to let her go and he did.”

“If Stuart was here today and we had survived that storm I’d still get in a boat with him and I’d still sail with him. He was a very good skipper and he made sure he had another very good skipper on board. I still feel happy for the experience but devastated for the loss.” 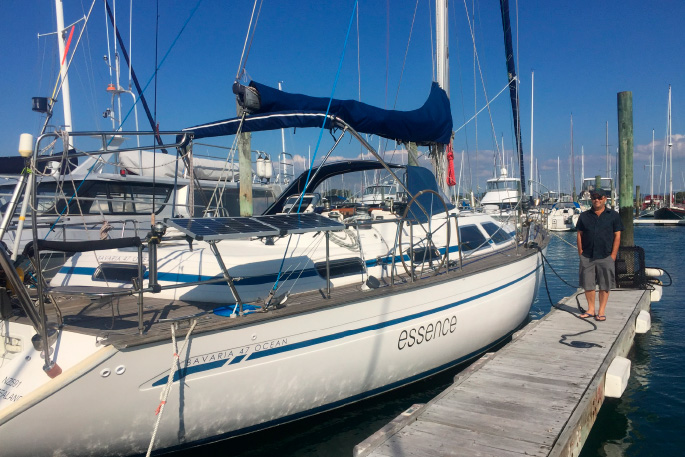 Improved facilities for the summer

Where are all the John Dory?

Named the best in NZ

Not the normal actions of a Skipper