Lucas Macdonald, Biosecurity Officer from the Bay of Plenty Regional Council says the education component is critical, because many boaties visiting from outside the region may not understand the catfish threat:

“It’s really important for people to realise that boats can spread these pest fish. The fish get transported along with aquatic weed in boat trailers so it’s crucial to remember the check, clean, dry message and make sure your boat is drained of water - especially when moving between waterways.”

“All it takes one person to unwittingly transport a small fragment of weed, a pest fish or its eggs to a new body of water and cause irreversible damage to our lakes,” he says. “Once established, aquatic pests are difficult and costly to control, and even harder to eradicate.”

Catfish were first discovered in Lake Rotoiti in 2016 and subsequently in Lake Rotorua in December 2018, highlighting just how easily they can spread between waterways. Since netting operations first began 3 years ago over 63,000 catfish have been caught using fyke nets. Encouragingly during the 2018/19 net season a drop of 18% catfish were caught from the previous season, despite twice as many nets being set. But with each catfish able to produce up to 6,000 eggs and survive out of water for up to 48 hours, there is no room for complacency.

The Brown bullhead catfish can grow up to 40cm long and are typically a dark brown / green colour with thick and leathery skin. They are easily identifiable by a sharp toxic spine on their fins and have four pairs of barbels around the mouth 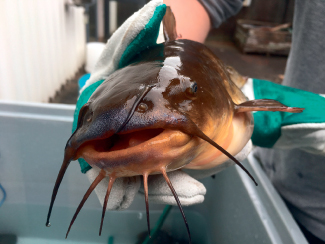 Why they are a problem

They feed on small native fish, trout and their eggs. Catfish also compete for food with other native species, including koura (freshwater crayfish). They lower water quality by stirring up  mud to feed.

How to prevent the spread of all aquatic pests

Before leaving a lake, waterway or river:

1.    Remove all weeds from your boat trailer and gear. Not only does this prevent any aquatic weeds hitching a ride from being spread but also any small catfish or eggs that could be hiding in the weed.

2.    Empty any lake water or ballast you may be carrying. This is especially relevant to those water-skiing and wakeboarding.

The Regional Council and Te Arawa Lakes Trust have been working closely with locals in the last 9 months to raise awareness and started a community netting programme in the Rotorua Lakes. The Te Arawa Catfish Killers have successfully netted 3,125 catfish to date, while volunteers are also on the lookout in the wider Rotorua Lakes by netting in Lakes Ōkāreka, Rotoehu, Rotomā and Tarawera.

Council-funded research currently being undertaken by NIWA and the University of Waikato to find new surveillance methods and tools to stop the spread of the pest is showing promise. The outcomes of both should hopefully be able to feed into future control activity.