Richard and Caleb waiting for a tow out onto the harbour.

It’s always been difficult for Caleb Evans to focus and ‘get’ something new.

The 13 year-old suffers from an intellectual disability, Foetal Alcohol Spectrum Disorder and ADHD – but from the moment he set foot in a sailing boat, he has thrived.

Caleb has been sailing in Hansa 303 boats on Tauranga Harbour since October last year after joining Sailability Tauranga – a volunteer-based charitable trust which provides weekly sailing opportunities to anyone with a disability.

“He feels accepted and valued which is a priceless gift for Caleb in a world that is not always accepting of disability, particularly when you can’t see it,” explains his mother, Maree Evans.

“One of Caleb’s strengths is an ability to watch and mimic what he sees. This is how he learns best – by the physical doing rather than academic learning, so sailing is perfect for this.

“He also has a newfound ability to be given constructive criticism and change what he is doing in response. These skills are being strengthened by the coaching he’s receiving at Sailability and we believe will one day assist him into successful employment.”

In fact, Caleb has made such great progress that he was chosen by his Sailability coaches to compete in a national Hansa regatta in March – winning his particular class.

“He was very proud of himself that day. He is a bit of an adrenaline junkie so he gets a rush from sailing. The rougher and faster it is, the more he loves it.”

Sailing Director of Sailability Tauranga, Alistair Eagleson, says there are more than 45 sailing members of the organisation at present, with many additional sailors taking part in weekly sessions. 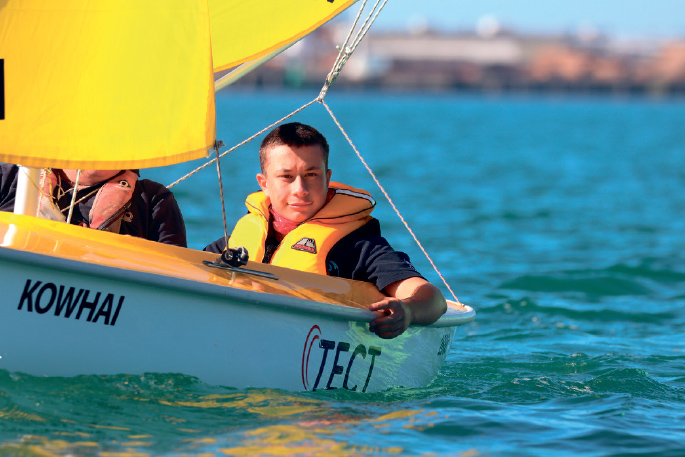 The club currently sails six Hansa 303 which can be sailed either single handed or two handed. Experienced skippers accompany most sailors onto the water where they’re taught how to pull in the sheets, steer the boat, and perform other tasks they’re capable of during their one hour session.

“Our programme ranges from therapeutic sailing through to learning to sail and then learning to race. We talk about possible goals, and by ascertaining their abilities on the water, we’re able to make suggestions as to what their next steps could be.”

Alistair clearly remembers taking Caleb out on the water for the very first time. “I could see straight away that he had potential. Aside from competing and performing so well in the regatta, he’s now gone on to racing a keel boat in the Wednesday night summer series. So to see that progression over the past few months has been a real highlight for us.”

Sailability operates world-wide and there are now organisations in Auckland, Hawke’s Bay, Rotorua, Taranaki, Waikato, Wellington and Whangarei as well as Tauranga.

Volunteers manage each sailor’s learning progression carefully in terms of safety. “But the pure enjoyment, confidence and satisfaction sailors get from sailing is quite heart-warming to see and rewarding for volunteers.”

Highlight of the week

Maree says sailing is now the highlight of Caleb’s week. He was recognised as an ‘Emerging Talent’ finalist in this year’s Bay of Plenty Disability Sports Awards.

“He has been a part of a great team of sailors and enjoys the comaraderie and competitiveness immensely. He’s involved in every aspect – from setting up the boat, to sailing it and putting it away again. Caleb also really enjoys sitting for a chat with the skippers and volunteers afterwards, as well as the fabulous bread rolls!”

She acknowledges that patience and perseverance is required by skippers to help Caleb focus and not be distracted by other sailors and boats. “We believe that with practice, new brain pathways are being made or strengthened so again sailing is great for this.”

A slow processing speed also effects Caleb’s ability to respond quickly. This can be frustrating for people trying to teach Caleb a new skill, Maree explains.

“If Caleb is in an environment where he feels under pressure, he will respond with anxiety and sometimes a meltdown. We have never had this type of behaviour at Sailability and this comes down to the skilled support given to Caleb by the skippers and all volunteers involved.”

Like any other parent, Maree says she’s always keen to expose Caleb to new activities and skills. But when your child has a disability, she says the range of choices is sometimes narrowed.

“Caleb loved sailing from the moment he first tried it. But just as importantly for Caleb is the opportunity to be around great role models and other people of various ages with a range of disabilities. He has been able to attend trainings by himself which gives him a very important feeling of independence as well.”

Anyone interested in joining Sailability Tauranga’s weekly programme is welcome to contact the club to arrange a free trial session. Because of the size of the boats, children must be at least 10 years-old, Alistair says.

“Similarly, we welcome anyone interested in volunteering to help with sailing days or even assist in an administrative capacity. Eighteen volunteers are required to ensure the sailing experiences we provide are well organised and sailors enjoy sailing in a safe setting.”

For more information about the organisation visit www.sporty.co.nz/sailabilitytauranga